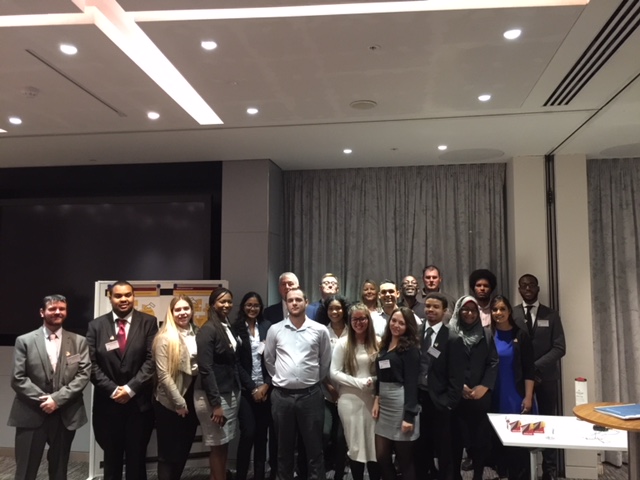 Each December we hold a celebration of all who have completed Growing Talent over the previous year.  Traditionally we give a heavy glass trophy – great for collecting dust!  Then Jon had a brilliant idea.  Why not give everyone a watch – light, portable and useful. Rosie added to it ‘what about a fitbit’.  Fantastic idea.  Fits with the ethos of Growing Talent – looking after yourself – as well as functional.

18 December – at 3.30pm the graduates of all four programme ran in 2017 started to arrive and catch-up with each other.  It had been almost a year since some of the guys had completed the programme so lots to catch-up on.

Unfortunately, out of the 27 graduates only 21 were able to get time off from work and attend……..

Watching – should I say cheering – in the audience were some of the employers who had taken part including Rosie & Jordan from MitieTDM, Julie from Portico, Sharon and Nigel from Harrow Green, Jamie, Adam, Pedro from Pertemps, James from Red Personnel, Ebb from Holiday Inn Brentford Lock – part of RedefineRBL, Steph from Iron Mountain – who was on annual leave but still come in – thanks Steph!  and of course some of the managers who support by running workshops – Allen – finance roundtable/social enterprise judge, Lesley – 3Rs – Refuel, Renewal, Refresh, Chris – Art class, Julie – personal image and customer service.

The central co-ordinators from JobCentre Plus – Anna and Jacqui also attended along with some of their colleagues from Bromley – Jill, Charlotte and David.

Also in the audience to learn more about all stakeholders’ experience were Charlie and Amy from Principal Hotels who hope to recruit through Growing Talent for their new Russell Square hotel in 2018.

First off and completely off script, Ilamathy graduate from Red Personnel and Rupert graduate from Harrow Green presented Jon & Steve with some well deserved recognition for their support of Growing Talent…… 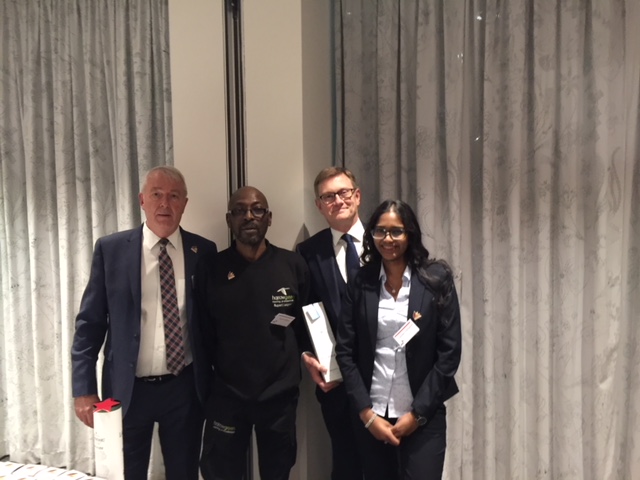 After this, Jon commenced his Master of Ceremony duties! 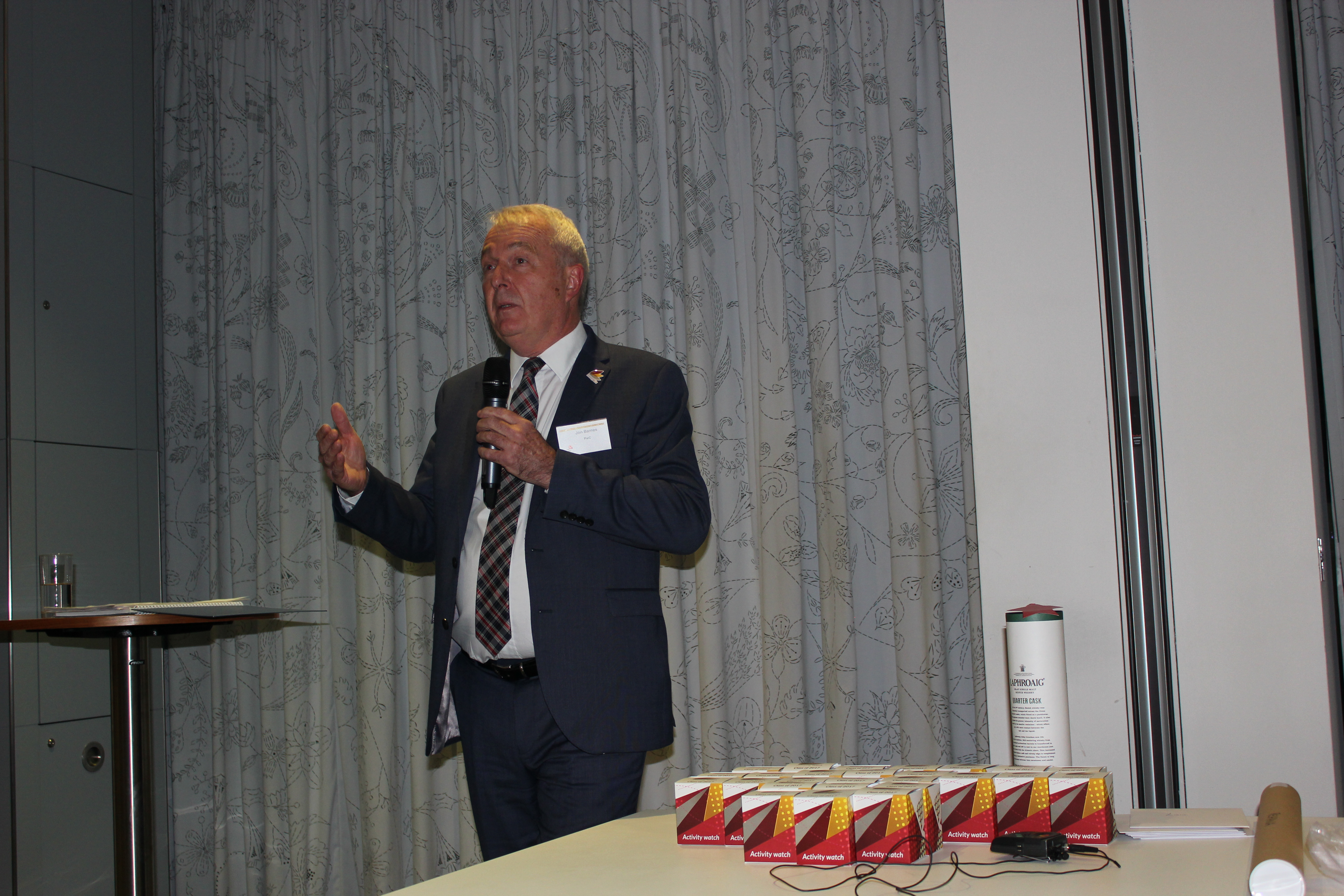 Jon also showcased a sneak preview of the new Growing Talent poster designed by Rehana, graduate of the 7th programme which goes live in Job Centres across London in January 2018: 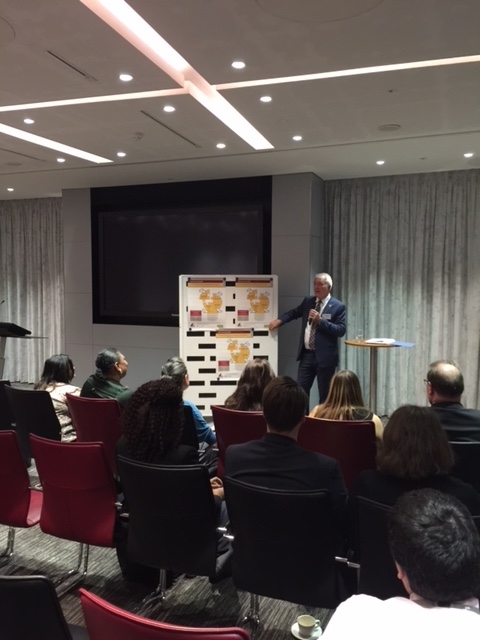 More on the poster can be found in the dedicated blog.

After initial introductions, Jon welcomed Mick from Harrow Green who completed the programme two years ago to share his journey and what’s happened to him since….. paraphrasing below

Jon:  So Mick, tell us your story.  Where where you two years ago?

Mick:  I moved up to Manchester 30 years ago, got married and had a family.  I worked for the most part with the airport loading/unloading the planes.  It was great.  But then my marriage broke up and I couldn’t find work.  I tried for three years to find a job before deciding to move back to my mum’s.  After two years job searching – so five unemployed in total – I’d tried every training scheme – welding etc but nothing let to a job.  One day at the Job Centre I was told about Growing Talent.  I thought they’d never pick me.  I was 58.  I did the speed dating and Harrow Green stood out for me.  They were the sort of company I felt I’d be happy with.  Then Sharon Sales picked me!  It was great.

Jon:  I remember we had a conversation at the start of your journey (Jon delivers various workshops on Growing Talent) – do you remember?

Jon:  I asked you what you wanted to get once you were working.  Do you remember what you told me?

Jon:  And what are you driving now?

Jon:  There you go folks – guts, determination, work hard and you can achieve anything……  You’ve all shown you have these qualities…. 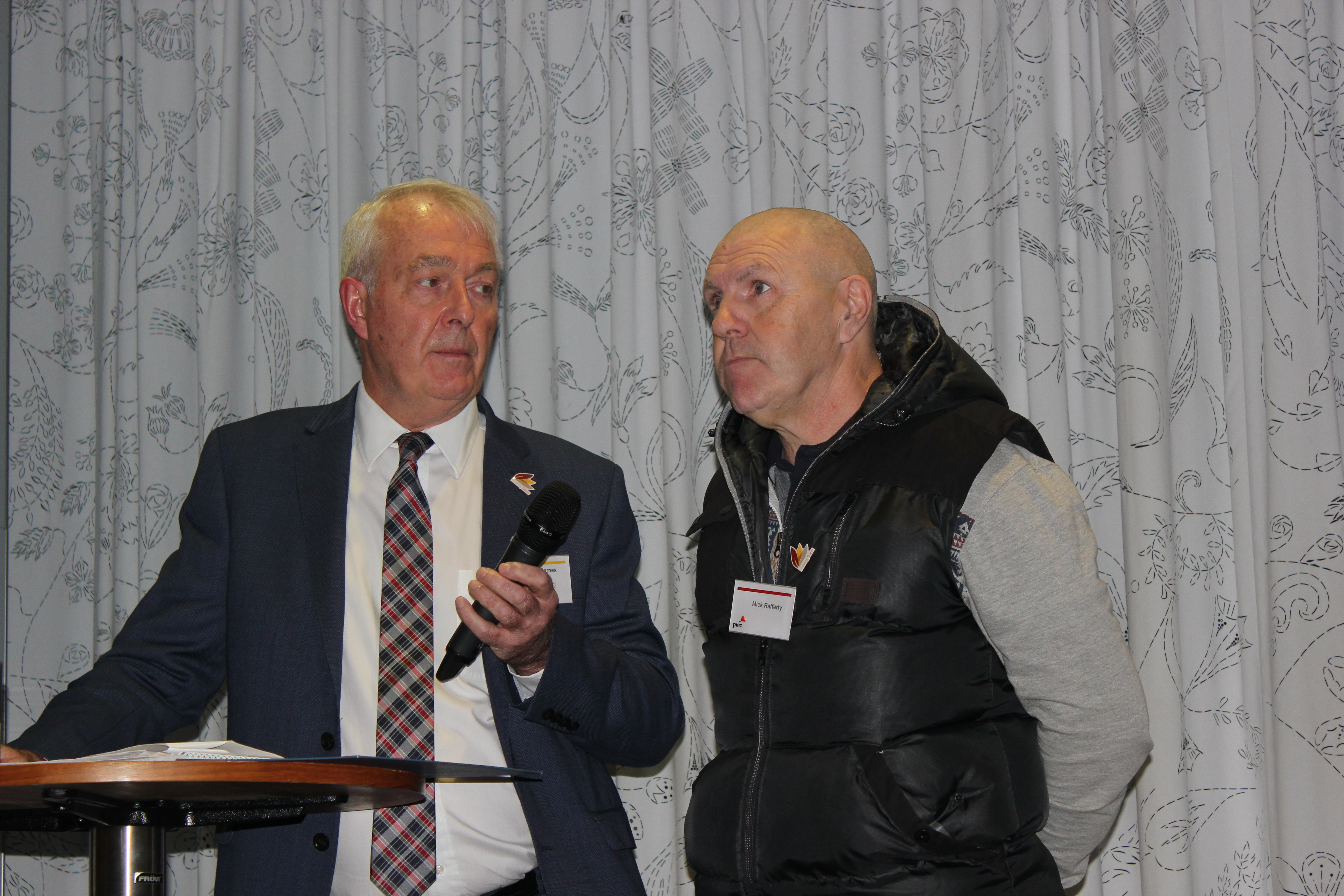 Jon then issued the fitbits and invited everyone to network over canapés and drinks…..

So what did the graduates feel about their journey?  Ashley pretty much summed it up…..

“Growing Talent gives great advice and assistance to all the candidates who are apart of the programme.  I have made a lot of close friendships  which I will never forget and will carry forward throughout the years. I would like to also thank Sharon for giving me the opportunity to work for Harrow Green. If I was able to do the whole programme again I would do in a heartbeat.  I hope that the Growing Talent programme continues to grow from strength to strength for many years to come.”