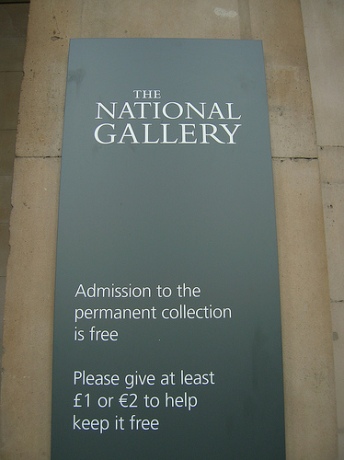 Ahead of their art class on the last day of the Holistic Week – we call London Vibe!, the Growing Talent Associates had a field trip to either the National Gallery or the National Portrait Gallery at Trafalgar Square.  The choice was theirs.

The aim was to push personal boundaries in trying something new.  This was easier for some who already had a creative spirit.  A task sheet was handed out which asked the following questions:

What painting ‘spoke’ to you?

What was special about it?

How did it make you feel?

If you could ask the painter one think, what would it be?

To ensure there was no ducking this task and using the internet, William sent a selfi: 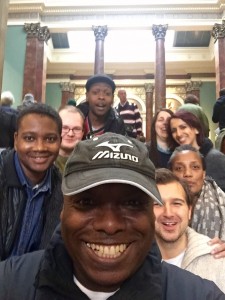 After a hearty lunch, the Growing Talent Associates descended on the popular London attraction!  The surprising thing was Priti, William and Leighon chose the same painting even though they didn’t go round the gallery together!  Whistle Jacket painted in 1762 by George Stubbs was their favourite.  William felt the eyes of the horse looked scared as though it didn’t want to race.  Leighon felt it was a huge painting and felt like the horse was in the room and Priti liked the feel of confidence the horse had.

Here’s what the others thought:

Maria – The Rokeby Venus by Spanish artist Velázqsef.   She liked the shock factor – a nude was frowned on at the time it was painted.  Maria liked this break with convention and would ask Velázqsef if this was his purpose in the painting or or it was just a private work.

Rehana – The Painter’s Daughters with a Cat (c1760) by Thomas Gainsborough.  Rehana liked the use of the ‘invisible’ cat and the sisters expression.  She had lots of questions for Thomas including was a cat actually present or was it just imagination

Ernest – the Virgin Child with the Baptist and an Angel by Paolo Morando.   Ernest liked the surreal effect which emphasised the protection of the child.  Ernest would ask Paola what inspired this painting.

Jacq – Portrait of Dame Judy Dench by Alessandro Raho.  Jacq liked the neutral colours and the calmness and strength that came through.  She would ask why Dame Judy was standing and not sitting.

Kearon – An Allegory with Venue & Time by Giovanni Battista Tiepolo.  Kearon liked the unique shape of the canvas and the detail.  He didn’t like the grotesque depiction of ‘time’ nor the slightly distorted face of the baby.  He would ask Tiepolo is the distortion on the child was intended.

Rose – Two Crabs  by Vincent van Gogh 1898, she loved the vibrant colours and wanted to touch the painting.  She felt the crabs were almost coming out of the picture.  Rose would ask van Gogh why he chose such colours.

Michael – Sunflowers – van Gogh.  the fame of the painting made Michael take a closer look.  It’s luminosity drew him in.  He felt it brightened his world to a small degree.  He would ask van Gogh what inspired him to paint this.

Kieran – A Lion Hunt by Rubens.  He liked the action filled subject which made him fell fear/panic/helplessness all at once.  the one question Kieran would ask is ‘Why didn’t you finish it?’

Jerome – Margate (?), from the Sea (this is the actual name of the painting – not a question!) painted by Joseph Mallord William Turner.  Jerome particularly liked the medium of oils he could almost feel the wind almost lost in the mist himself.  Jerome would ask why he used the atmospheric effects of mist and cloud and why was it unfinished…………

So, what did the guys think of his radical field trip?:

‘It shows how much free cultural activities we have in London, I can go now and then’

‘It was nice to be encouraged to do something different and, for me, something I wouldn’t have thought would interest me’

‘Very good idea, I plan to go more often.  It was different from everything else and inspiring’

‘An essential imagination booster – so glad this was included’

‘It makes you think about things you wouldn’t normally’

A successful event on many growth levels!