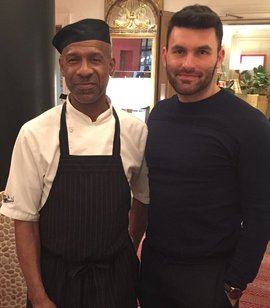 On Friday I visited Firmdale’s Ham Yard venue to see how Charizelle and Tara were getting on.  Meeting Tara and her line manager Andre in one of the hotel’s suites, both were enthused about the experience so far.  Andre knew little about Growing Talent nor the upcoming Holistic Week.  He confirmed it had been a great experience so far and he would be happy to take part again.  He praised Tara for her progress to date and then left us to chat privately.

Naturally, Tara is exhausted each evening but loves the buzz of going to work.  She’s already got plans to learn everything, progress as far as she can, get savings and have some holidays!  Sounds like a great plan!  With two existing team members moving on this week and new staff being hired, Tara is looking forward to what happens next!

Across the courtyard is the residential apartments where Charizelle is learning the ropes from Mireia who leaves at the end of this week after 4 years in the UK to return to her home City of Barcelona!  Charizelle’s role includes all the usual concierge duties as well as finance – Charizelle’s passion!    She’s very excited about the future and working with new colleagues.

Next stop was Firmdale’s Soho Hotel where Victoria is working with the back office team and Chef Paul is in the Kitchen!  The entrance was through the buzzing kitchen area.  Victoria outlined her role with the team which is largely administration and data entry.  She find’s the travel much easier now the ‘Beast from the East’ has gone and trains are back to normal!

Paul was late coming to speak with me as it was kitchen rush.  Whilst waiting, Dan explained how Paul’s dishes are going down a storm with staff and customers!  Paul arrived and as you can see in the feature photo looks every inch a confident Chef that has worked there for years!

Check back to see how they get on…..