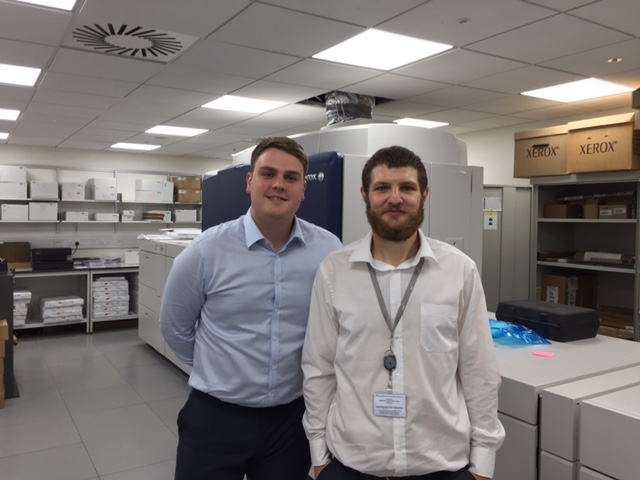 Friday 19 August saw my visit to MitieTDM at PwC More London to catch-up with Peter on the current programme.  He’s been working with Jordan – seen in the feature photo beside one of the IGen machines  which is huge!

Peter is learning reprographics, document production and finishing in his role.  The potential for development is huge.  The role Peter is training in is only available as his predecessor, Mehmet from Growing Talent 6 has just been promoted!

Still managing to get to the gym before work and still have time to relax after, Peter is relishing returning to work.

On arrival on site I spotted Chelsea from Growing Talent 6 who originally joined Wilson James in administration before moving across to MitieTDM’s Service Solutions Desk – seen below with Peter – what a small world! 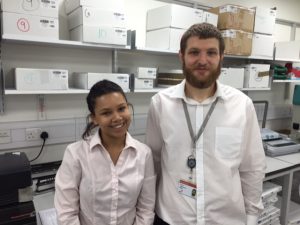 Apart from Chelsea on site, Peter has many other graduates of Growing Talent including Kit, Reece, Kieran, Joshua & Sadique to name but a few!

Amongst the team supporting Peter is Jean Plow. 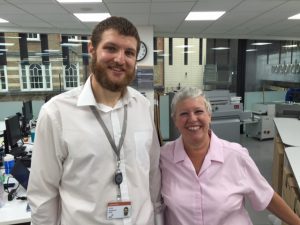 Previously I ran a programme called the Real Apprentice.  Jean was part of the team on the very first programme delivering employment skills.  She’s worked on many programmes to train and support ‘newcomers’ since including the pilot of Growing Talent!

Peter loves being at work and part of a team.  Although he hates having his photo taken, was gracious in doing so to encourage others thinking of following him.