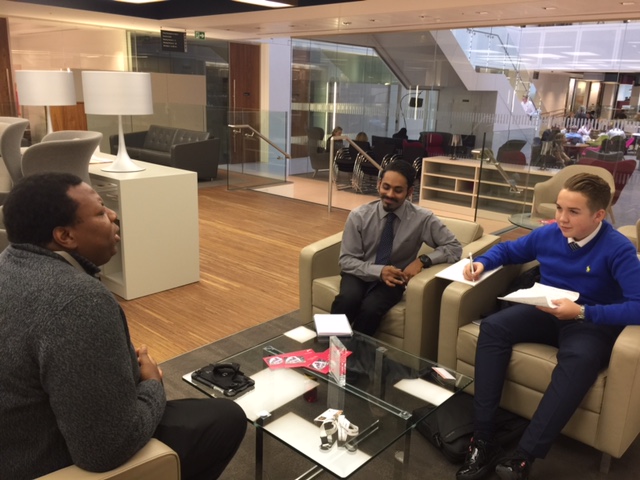 I started off my day by going to More London to talk to Sadeeq and Kieron. Kieron has a biology degree and enjoys building PCs. Sadeeq claims to be a mince pie lover, and enjoys to eat burgers or search for new burger bars in his free time. Kieron feels more confident when working in new places since he has gone through the scheme. Sadeeq says that the program has opened up more doors for him and is a perfect stepping stone. Now the graduates have finished the course they seem positive about every aspect of the work place.  Sadeeq does everything Jane asks of him and gives back because “Jane has never steered me wrong” he says.

My second interview of the day was with Michael, a graduate who is driven by his Children. Michael has been paragliding in Tunisia and is a father of two. Before Michael had joined the course he wanted to give up and was being resigned back to Africa. His partner fell pregnant so he stayed and this is when he got picked up by the Growing Talent scheme. Michael loves the course and suggests it to everyone! Michael says that its a much better and more flexible way to get into work than going to the job centre every day. I asked him what part of the course he enjoyed most and he told me “All of it!”. He said he would never forget Jane for the help she had provided. Work is tiring, so to switch off be goes home to sleep!

Another interview at Hayes, this time was with Kavita. Kavita enjoys shopping because now she has the money to buy anything she wants… within reason. Kavita has learned skills on the computers such as how to be more formal when writing an email. Kavita’s travel used to be funded by the scheme, but now she is earning money she is finding it super easy to manage her own transport costs. Kavita said “Without Growing Talent I wouldn’t be here today.” I asked for one person she will never forget from along her journey and she told me “it has to be Sharon Sales” from Harrow Green. 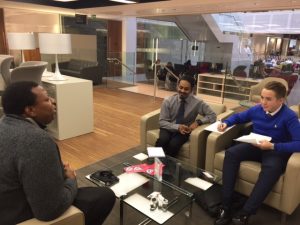 To finish off my day I went over to Embankment Place, to meet Alenchenu – from Growing Talent 5 who is mentoring Julian a current Growing Talent Associate going through the process. Alenchenu’s claim to fame is his massive hands and he also loves playing video games. Julian enjoys cycling, surfing the web and watching TV. Alenchenu says the program has turned his life around and that it really depends on “how much you want it” He holds the record for the earliest into work at four weeks – he didn’t event get to do the Holistic Week. Julian’s social skills have improved massively, he is comfortable talking to new people in any environment. Alenchenu, when he got his first pay check, moved into somewhere new where he has his own space. Julian who is currently working towards his first pay check is looking forward to buying a new winter coat. They both claimed Jane is a “Legend” and that neither can thank her enough!