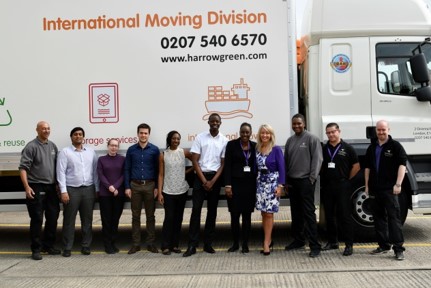 I’d been asked to present to the Judges of the PFM Awards for Harrow Green as part of their entry focusing on the training and development of their staff through internal training, industry led training, their own development in association with BAR (British Association of Removers) of trailblazer training as well as their staunch support of Growing Talent!  You can see Sharon – Executive Assistant – and some of the fabulous Growing Talent Associates the company has recruited in the feature photo!  Impressive………..don’t you agree?

With the sun beating down and almost 30 degree heat outside the air con in the presenting room was a welcome relief!

Despite a few last minute technical glitches with the presentation, all was calm when the two judges walked into the room.  Both seasoned FM professionals, the game was on! 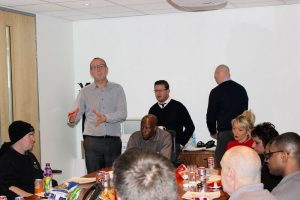 Nigel, standing to the left in the above photo, in a typical session with new Growing Talent Associates as part of their initial training session.

David, Group Head of HR, gave a break down of the investment and return figures, Sharon described her input and support – although most of her presentation was undertaken in a private 15 minute session with the judges for a separate award dedicated to her work.  All ‘hush hush’ until the awards night in November!

My role was to set the scene on what Growing Talent is and how Harrow Green have been involved.

I sat there very ‘smug’ as every slide appeared.  Almost every one included photos of some of the 28 Growing Talent Associates employed.  So great to see their confidence and support for both Harrow Green and Growing Talent – I know how much they all hate having their photos taken so this was  really appreciated and told the story to the judges brilliantly.

The ‘fab four’ then entered the room. Shanika, Josè, Charlene & Emma spoke about their background and experience – the judges almost needed kleenex!: 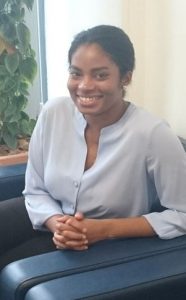 Seen above, Shanika was on the 5th programme with Josè with a boomerang work history in retail – which she never enjoyed but kept getting hired for!  Growing Talent and Harrow Green gave Shanika the opportunity to learn something new.  Now a Moveware Co-Ordinator she is involved in every aspect of the business.  Shanika came in especially to support Harrow Green – she is officially on holiday all week! 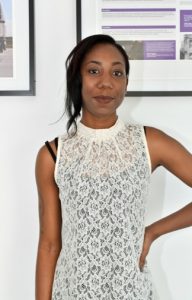 Charlene was next to speak.  She doesn’t like being the centre of attention nor public speaking but did so for Harrow Green.  Charlene has just returned from a week at Butlins with her young children – which she paid for! Yay! one of her goals whilst on Growing Talent. She joined the company as their first female porter and worked well with, the pretty much all male, team.  When an opportunity arose in the office, she jumped at it and is now part of the Moveware team.  Working in an office was something Charlene thought was out of reach.

Next up was José!  Seen below, whilst he had a HR qualification, his employment experience had always been in hospitality.  He’s now a fully qualified HR Manager! 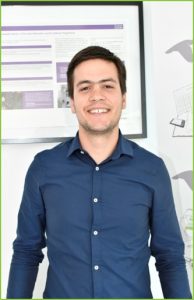 From the Portuguese island of Maderia, Josè decided to leave the world of hospitality and come to the UK.  Arriving with little English, he undertook roles in hospitality whilst he trained during the evening.  Although Sharon didn’t come to the employer selection with a HR role she knew one was needed!  Josè finally received the opportunity he wanted.  Now qualified, the sky is the limit on the options ahead of him.

Last to speak was Emma from Growing Talent 9 – which only ended a few short weeks ago! 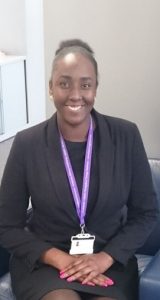 Emma’s solid work experience had been in retail including John Lewis – which she thought would be her ideal role……until she did it!  Having held the role for almost three years, Emma eventually ended up being referred to Growing Talent.  Sharon snapped her up for Security Assistant – not manning the doors but ensuring everyone had the correct, current documentation.  In less than three months, she’s been promoted to Security Manager with a flexible team of three under her.

After the main section, everyone was asked to leave apart from Sharon.  I took the opportunity to catch-up with some of the other Associates I saw in the office including Samick from Growing Talent 2 who had just returned from holiday in Edinburgh and is still loving his finance role. then I spotted Maxine who is still as enthused, lively and fabulous as ever.

After I left, I heard footsteps behind me and turned to see James Ibitoye from Growing Talent 2 who wanted to say hello.  He was originally recruited as a porter and is now working in all areas within the office and operations – such growth. 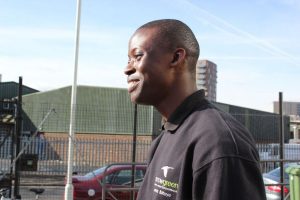 Harrow Green should get the award on the Associates performance alone – of course I am biased!

Results will be issued at the ceremony in November!