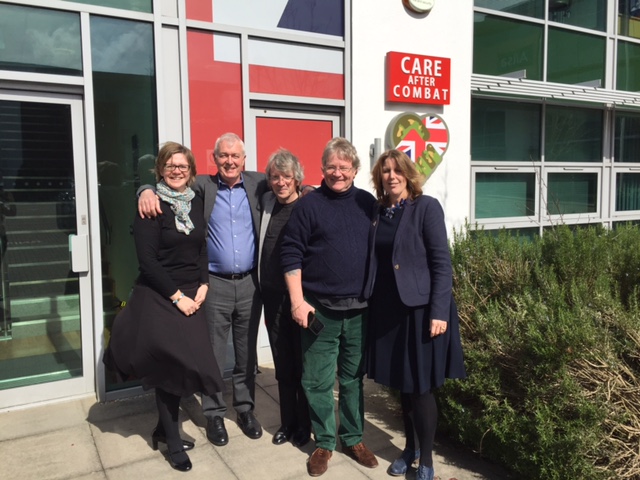 A bright sunny day dawned on April Fool’s Day.  The day Jon and I travelled to Southampton to meet Care After Combat and their charismatic Chairman – Jim Davidson OBE.  With Jim’s reputation, I was a little apprehensive on what might happen!  I wasn’t disappointed!  A unique icebreaker when Jim walked into the Boardroom.  ‘You look like my first wife!’

It was clear how passionate Jim, Nick and Sarah are.   Jim has a huge heart and proven passion for supporting our service personnel which isn’t always showcased in the press.

Care after Combat (CaC), was founded in November 2014 by Jim Davison OBE, (Chairman) Simon Weston OBE and “Goose” Cryer MC.  They support the transition of personnel from the Forces to the civilian world and most importantly into employment.

That last point was the reason for our meeting.  Jon’s division withn PwC is already supporting CaC financially through a golf day.  Our mission was to see if Growing Talent would be a good fit in the menu of options CaC’s team use to get people back to work.

Along with Jim we met Dr Nicholas Murdoch – Director of Operations and his Deputy Director Sarah Clewes.  Both are ex-service personnel and know first hand the difficulties that can be encountered in transitioning from Forces – civilian life.  The achievements of CaC in little over a year is commendable.  They have the same no nonsense approach we at Growing Talent have – just do it!

Despite being such a young charity, CaC has achieved a lot not least a residential phase  going fully operational later this year.  Simon Weston House will house 12 people in self contained homes of their own.  Their own space to begin the next chapter in their lives.    Like everyone else that is unemployed, veterans from CaC will have widely different support needs.   CaC sees the individual and their unique needs – not generic labels – another connection with Growing Talent!

CaC also works with the most vulnerable personnel including those currently in prison.  The charity’s work is so impressive, they have secured  seven figure funding from the Ministry of Justice already.  An amazing achievement so early on.

After explaining the background of Growing Talent  – how/why  it started, the stats so far and some of the experiences of Growing Talent Associates, we agreed to start off with small steps.  Nick and Sara will  see it in action first and then refer some applicants in the future.  They will be participating in Growing Talent 9 as judges on the Social Enterprise judging panel on 13 May in London.

In the meantime, to learn more about CaC check out @CareAfterCombat or www.careaftercombat.org.