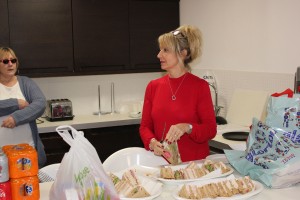 I always knew Sharon Sales had a lot of roles at Harrow Green – Executive Assistant, Marketing, Events, Recruitment – but Catering as well???? talk about multi-tasking!

Sharon arranged for all her current Associates and all members of staff who joined the company via Growing Talent to lunch in the boardroom to see how everyone was getting on.  She was keen to hear from those who joined in the early days to learn any training they wanted.  As you can see – the numbers were huge – 20 Associates/Graduates – making standing room only in the boardroom! 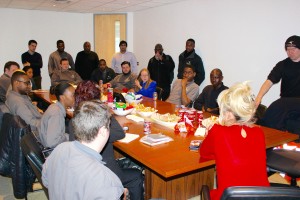 On arrival at Silvertown, I bumped into James seen below working away at his computer……….. Joining through the 2nd programme the transformation in James’s confidence is amazing.  He’s now an integral part of the team. 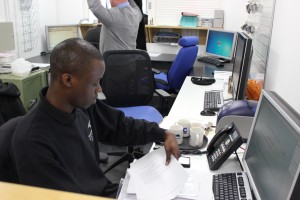 It wasn’t long before the rest of the team came to see what was going on! 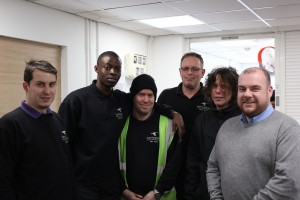 Matt – in the high vis jacket – joined on the 3rd programme and quickly secured promotion within the warehouse team! Go Matt!!!!!

Maxine tried to avoid the camera whilst getting a cuppa – as if that was going to happen Max!!!! Joining via Growing Talent 4, Maxine has been with Harrow Green for a year now and shared her first appraisal – amazing achievements.  Max’s view in her covering email ‘the work and effort put into running Growng Talent has really helped me.  I’m so glad I joined Growing Talent and the support I can now give to those following me.’ 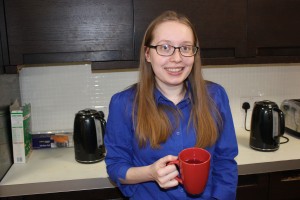 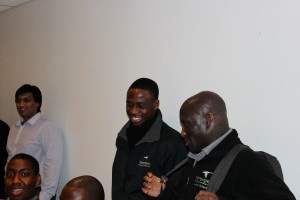 He’s enjoying the job still – there’s so much to learn.  He has his eye set on HGV licence! Next to Joshua is Jason who joined on Growing Talent 5 and flourished!

The interesting line-up below shows (l-r) Jose from Growing Talent 5.  Before Growing Talent he held various positions in hospitality whilst funding himself in HR qualifications.  Sharon spotted his potential to join Harrow Green’s HR team and he’s been flying ever since!  Ernst and Will next to Jose both joined on programme 7.  Ernst has always been really quiet but really hardworking.  He still enjoying his role. 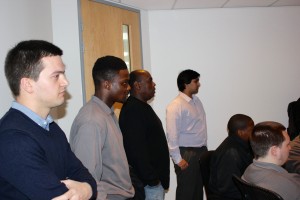 Will was used to early starts following his long tenure in the care sector so the 6am starts didn’t faze him at all!!!  Standing far right is Harrow Green’s second veteran Sam from programme 2.  Like James, Sam didn’t really know what to expect.  There were no prior Associates on site to guide them!  With a degree in finance and accounting, Sam was keen for a role he could use his education in.  Sharon made a few calls and Sam joined Harrow Green’s finance team.

So far, all the guys were telling me they had remembered the I mean encouragement to start saving as soon as they could.  All have some savings now.  Now they are getting into the savings habit which will give them real choices…….. 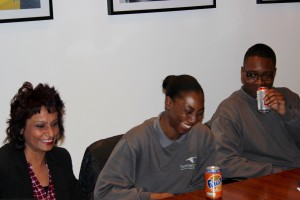 Tina and Charlene above are on the current Growing Talent featured above with Kearon from programme 5.  Tina has a mammoth journey of over 2.5 hours each way!  Charlene has made history at Harrow Green – she’s the first female porter with eyes on being the first female HGV driver there too!  The banter in the room was free flowing – as if everyone had known each other for ever! 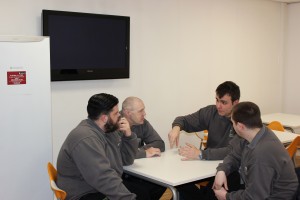 Jack, Matt, Tom and Joe catching up on their respective duties at Harrow Green.  Although they are all on the same programme – they’re out with different crews so time for a good gossip! 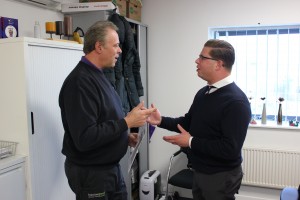 Phil (l) – the trainer at Harrow Green and Trev – The Legend – actually Operations Manager! discussing the brilliantly talented Growing Talent Associates just before the lunc commenced.  Both are hugely supportive of the programme and heavily involved. 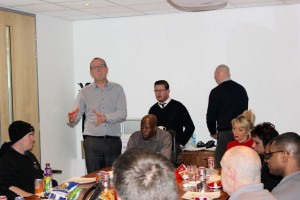