So what’s involved in the workshops?  Everything to prepare someone for the workplace who hasn’t been there for a while.  It’s amazing how quickly confidence drifts away when people haven’t worked for a while.

Emma, Paul and Nad were selected to join Harrow Green.  Emma will be working in the office supporting the security division.  This involves unsociable hours and communicating effectively at all levels.  Paul is joining the international team.  This small group facilities all international business moves for Harrow Green.  Nad will join the operations team as a porter – which he views as a ‘free gym’! In time, Nad’s IT expertise will be used for additional responsibility in this area.

Len’s enthusiasm and confidence was snapped up by Selvan of Invest In Buy To Let. Smart in appearance with the ability to think on his feet, Previouly, Len had spent six months with a company involving 6 hours travel a day – what tenacity to work!  He will be buddied and mentored with one of he sales team to learn all aspect of the company’s unique business.

Anita was identified by Michael and Michelle as a great new addition to their Portico team on the PwC account.  Despite the furore in the press and social media, Anita secured the real facts from Krupi during her roundtable visits – seen centre below with Becky to the left and Shanika on the right.  Becky was on the last Growing Talent with Krupi and Shanika was on the 5th programme.  She works with Harrow Green.  After this session, Shanika took Paul, Emma and Nad back to Harrow Green to meet the team. 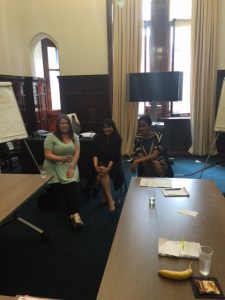 A three course lunch was enjoyed each day.  Nad took the cute view that he could have soup whilst the others were getting their mains.  By their reactions/recommendations, he selected his main!  In addition, the queue had died down! – clever!

All of the workshops were geared to the Associates delivering their social enterprise idea on Friday to a panel of managers.

‘The past is the present – the future is today’ by Reece – encompassing disengaged youth to give them pride and direction.

‘Each One, Teach One’ by Lauren – with the diverse range of languages and the immdiate issue of immigration/refugee people arriving in te UK with no English, the burden on schools to teach is English as well as their usual subjects is clear.  Lauren’s idea was to include parents so both learnt at the same time.

‘Self Start’ by Emma, Anita & Paul was a unique take on the personal experience of homelessness.  Apart from the establsihed resources of niche organisations was the innovation of a ‘grow bag’.  This comprised essentials such as socks, soap, toothbrush/paste as well as a sleeping bag.  Giving a homeless person their own possessions and a starter kit to ease immediate issues.  This is especially needed for those people who do not want to move away from the streets. 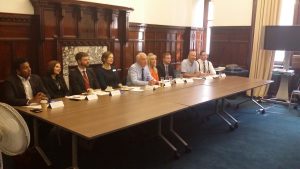 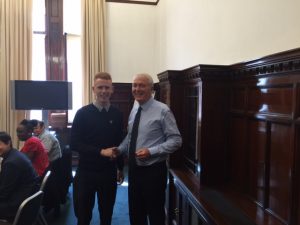 After a lot of deliberation, the judges selected Reece as the overall winner.

The judges then shared their journey to their current role with their top tips for success.  An interesting example came from James of MitieTDM who shared his feelings at being unemployed and how he was invited to apply for a similar programme to Growing Talent.  He said he walked in the room and there was Jane James – that was 10 years ago!

After a sumptuous lunch with the employers, and networking to get their contact details the Associates left to prepare for their first day on site on Monday having done a great job on the Orientation Week!