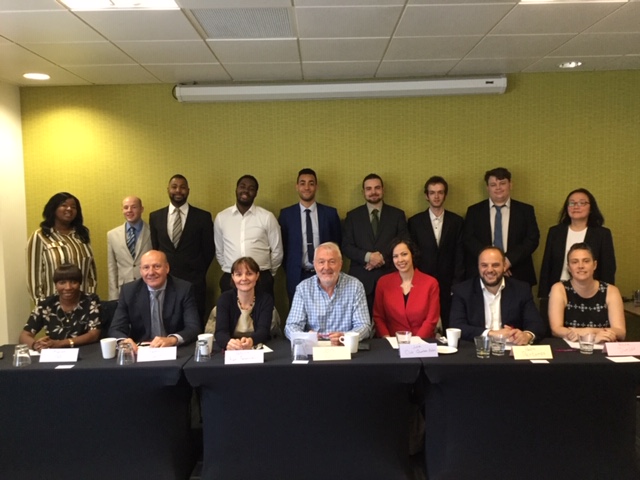 The Orientation Week of Growing Talent culminates in a challenge to present the best social enterprise idea to a panel of managers from the participating employers.

The idea has to be based in a local community, which delivers a revenue stream, benefits the community and has capacity for onward growth. A nerve racking time which gives a sense of triumph and self esteem to all Growing Talent Associates – once they have finished of course!

So the ideas – in no particular order:

Stallion Cycles by Calum who is joining Park Plaza Hotel at Westminster. Living in a small village, Calum had noticed how congested the single road in and out was – especially when on his driving lessons! Calum’s idea was based on the ‘Boris Bikes’ of central London but for those living out of London in semi rural areas or traffic hotspots.

Pegasus devised by Brendon was set in the Brookhouse Road community centre where he lives. Addressing self esteem, personal belief using a mixture of sports and professional encouragement. Brendon is a little camera shy so no photos of his excellent presentation.

Scripts by Romain based in part on his own experience discovering acting as a vehicle away from the wrong path and crime. Taking over a disused cinema, Romain had a number of strands to using art. Life skills would be taught to 5-11 year olds – kindness and respect of others. His core audience were 15-25 using all the potential career opportunities in a theatre for them to try and consider. In addition, rooms above the theatre would be rented out for studio space and similar. Romain joined Park Plaza Hotel at Westminster.

Life Advice by James focussed on working with high school students on mapping personality to potential industries for career consideration, he also covered mentoring, investing, general life skills and opened up the opportunity to parents as well. Using a mobile unit he could visit estates/schools easily. James joined Red Personnel.

Strictly Dancing Elderly by Miyuki tackled fitness and isolation in the over 65s combining tea dances with social interaction, tea and of course cake! She based this in Lewisham where she lives and shared her story of isolation since her longterm friend found a partner leaving her alone. With a growing over 65s population , Miyuki’s idea was simple yet effective. Miyuki joined ISS at PwC More London

Street View by Stephan is based in Forest Hill where he lives. An area which has missed out on investment and regeneration over the years, Stephan had noticed how there was a growing population of homeless people on the streets and also the burgeoning art community who had no platform to showcase their work. Street View married the two. A magazine featuring the artists’ work sold by the homeless delivered a solution to address these two important issues which would easily be replicated in other areas. Stephan joined ISS at More London.

Steel Games was Jordan’s idea. Having stumbled into playing the steel drums as a child, he ended up as part of an orchestra which entered into a competition. Jordan’s orchestra come 2nd and they performed on Junior Panorama. Based in Anerley with multiple recent stories of knife crime, Jordan believed his idea would give those at risk of being involved a different path to consider. On one floor, he would have gaming consoles and teach young people ways to use this technology safely as well as a selection of steel drums on the bottom floor. Encouraging all to try out this diverse instrument. Jordan joined ISS at PwC More London

Sheldon presented Activate aimed at vulnerable young people 10-25years based in his home area of Orpington. Sheldon would use a variety of sports to teach discipline and personal strength as well as integrity. Growing health bodies and minds. Sheldon had a unique selling point which was the issue of vouchers to those young people completing 2 hours of workshops. Based in a disused Royal Mail warehouse, it would bring life to the building and help regenerate the area. Sheldon joined Pertemps.

A.I. delivered by Stephen was based on using artificial intelligence to deliver administrative innovations to large organisations such as JCP, NHS etc. The idea being appointments are never missed as A.I. removes the use of human error. A unique interpretation of the Social Enterprise Challenge. Stephen joined ISS at PwC More London.

Lastly Michael worked hard on his E-Library idea even though he was not attending the Social Enterprise Challenge as his employer Churchill Services had a large senior management meeting which Michael presented at instead- see below! Just as nerve-racking I suspect!

As you can see the judges above had a tough job deciding on the winner. After much deliberation the £50 cash prize was won by……

The winner was Miyuki with her idea for social inclusion for the elderly.

What a great day for all! A special thanks to all judges for giving their time and for Shennell’s support and encouragement all week. Shennell was on Growing Talent 6 and always returns when she can to support those following her.