Would you say no? 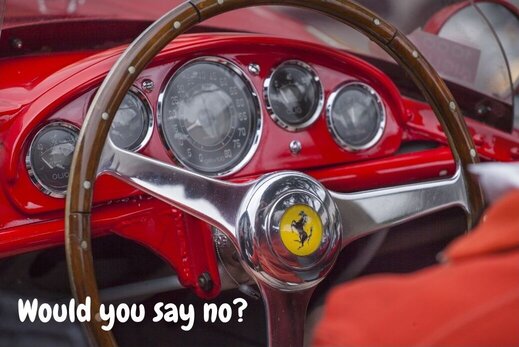 An interesting question which popped in my head listening to TalkRadio early this morning . Paul Ross was speaking with Nick Harris – the voice of motorcycling commentating.

I’m not a huge fan of motorsports to be honest but my ears pricked up with Nick sharing some of this memories of Valentino Rossi’s 25 year motorcycle racing career. Valentino retired at the weekend.

Valentino was the only person to win championships across multiple categories – 125cc, 250cc, 500cc and Moto GP.

An amazing feat to win in different categories. Even more impressive not to have their career cut short through injury. As charismatic as Briton’s Barry Sheen – but on a global scale.

Was any of these facts behind my question – “Would you say no?”

It was when Nick shared the story of Ferrari approaching Valentino to do a test drive with a view to become an F1 driver. Valentino did the test, passed and was offered the opportunity to join Ferrari’s F1 motor racing team. He said ‘no’! Enjoying motorcycling too much to switch – despite the increased revenue, adulation etc.

Having the insight to recognise what’s important to us and stick with it even when an approach like this is made, shows impressive strength of character.

Would you have said no?